A downloadable game for Android

A fun hyper casual time filler game. Play as a car and dodge those silly cars going the wrong way, at least i think that's the wrong way... Unlock new cars! Can you unlock them all?

Played it for a bit on my phone and PC,but 3 things

1.I think the controls could feel a little more responsive,you might want to experiment with that a little.

3.On PC,the controls where pretty obvious,but it took me a few tries to understand the controls so I would suggest some indication of controls for the first few seconds eg: https://imgur.com/eNtVU8t

I think the scenery surrounding the road added quite a lot to my enjoyment compared to a dull flat plane.Sorry this might seem a little rude,I did enjoy the game though and my advice might be useful.

Thank you for the feedback!

We will definitely start to work on those if we have some time spare.

I’m glad you liked the terrain :D I spent a lot of time making it and wish that I hadn’t as when we actually made the game and set the camera angle only 10% of what i’d painstakingly placed was visible *groan* Yes, we will definitely try to add the things you mentioned, I think we lost motivation towards the end as we had no one but ourselves playtesting, and we would focus only on the errors and a second opinion has boosted my motivation, so thank you very much :)

Ok the sfx have been added, as well as the control indication :D I will try and find more time to add particles tommorow :) 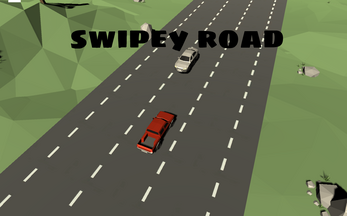